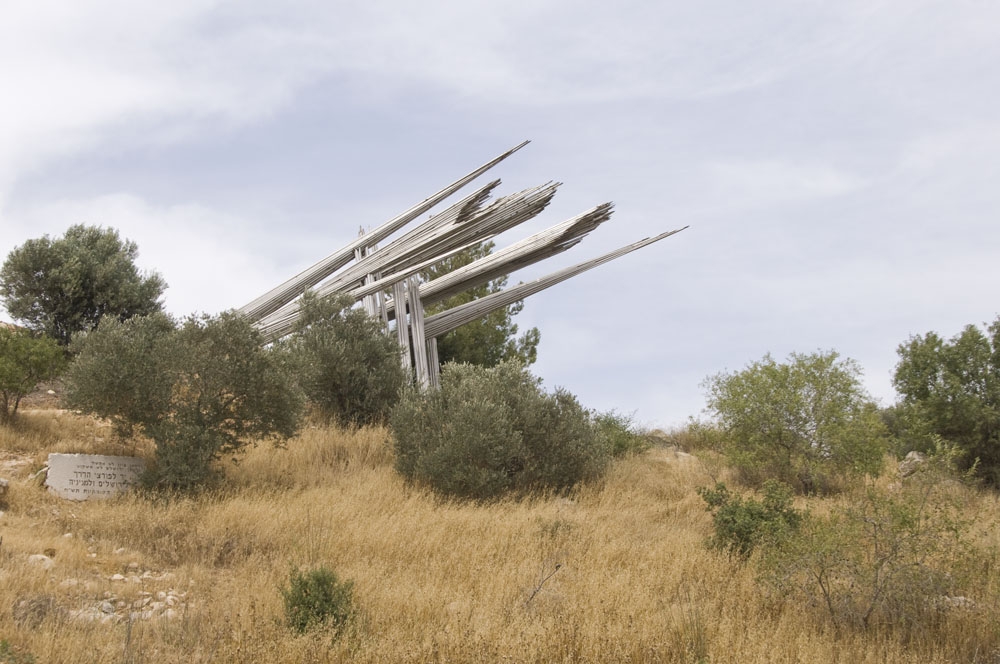 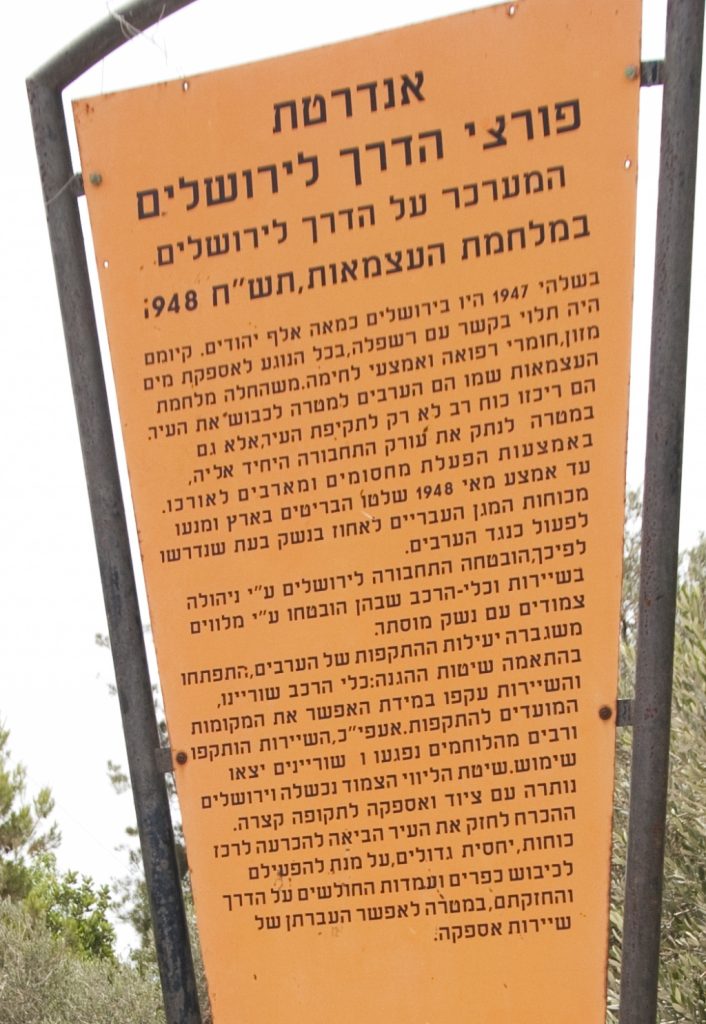 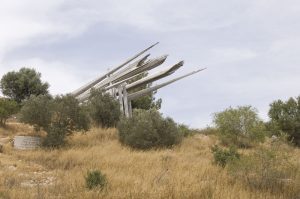 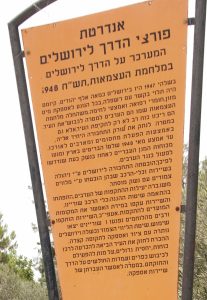 Click on image to enlarge
Description Rocket-like tubes projecting in a cluster from the side of a hill overlooking the highway
Caption "War memorial dedicated to the Jewish casualties of the 1948 battles for the road to Jerusalem (sculptor Naomi Henrik, 1967), overlooking Highway."
From: en.wikipedia.org/wiki/Sha%27ar_HaGai

The monument stands on a hill overlooking one of the weak points along the road to Jerusalem, where Arabs attacked convoys going to Jerusalem during the War for Independence. The monument that looks like it is leaping from the hill is composed of steel tubes mounted on a concrete base.

The design by the artist Naomi Henrik was selected in a competition over 56 other entries in memory of the soldiers who lost their lives in battles on the Road to Jerusalem during the War of Independence in 1948. Her sculpture was completed in 1967.

The following is a translation of the sign in the 2nd picture, with additional (comments in parenthesis):
Memorial for the Pioneers of the Road to Jerusalem:

Their livelihood depended on regular contact with the coastal plain for food, water, medical supplies, military equipment. As the war of independence broke out the Arabs intended to occupy (Jewish) Jerusalem. They amassed a large force with the intention of severing the only road. They laid roadblocks and ambushes.

Until May 1948 the country was under British rule which prevented the Jewish resistance forces from (openly) raising arms against the Arabs (Although there had been skirmishes since the end of 1947). Therefore (Jewish) traffic to Jerusalem was conducted in convoys escorted by guards with hidden weapons.

As Arab attacks intensified means to defend the convoys were developed by adding (makeshift) armour to vehicles; and by using alternative routes. Many of the vehicles were damaged and their escorts killed. With intensifying attacks the road was eventually blocked (and Jerusalem was under siege). Jewish forces were assembled to attack Arab strongholds in force and occupy them, thus enabling the opening of the road (the so-called Burma Road).

Other References About the sculpture and directions to find it: http://israelplaces.christ2020.de/#d

Look for the article by Susam Horwitz titled "Nitzanim: More Than Just a Beautiful Beach" in the  "Israel Travel - Off the Beaten Path" section of the Jewish Tribune, on June 29, 2006, on page 7: [www.jewishtribune.ca/tribune/PDF/jt060629.pdf]

For information about the Women of Valor Center: http://www.jnf.org/work-we-do/our-projects/tourism-recr...

For an article "Women and War Memorials in Israel by Esther Levinger go to:http://www.jstor.org/pss/1358629

Head Within A Head