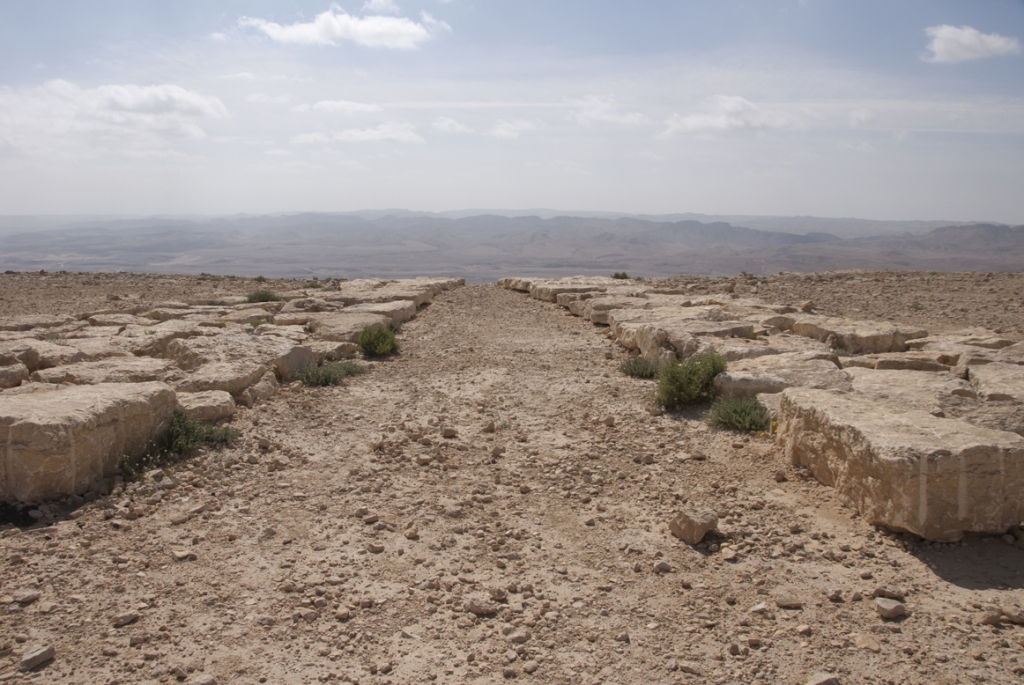 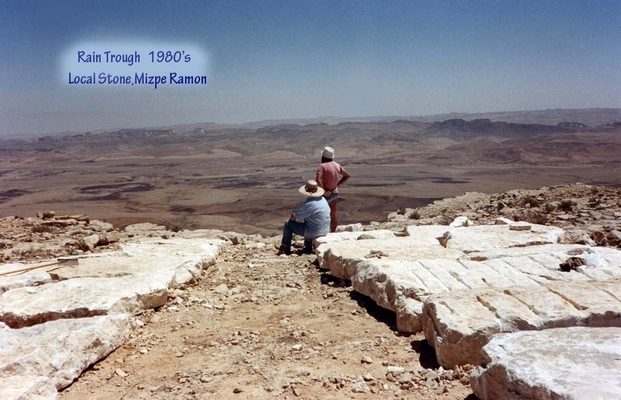 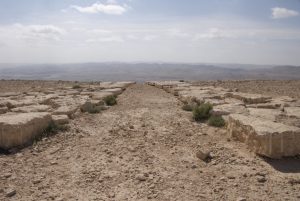 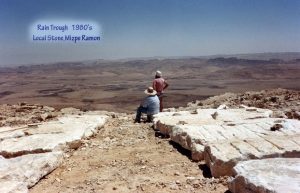 Click on image to enlarge
Description
Caption Rain Trough is located where water actually runs over the edge of the crater when torrential rain occurs. It was installed in the 2nd phase in 1986, and a couple more stones were added two years later.

"The first group of sculptors, 10 in number, from Europe and Israel, arrived in Israel in 1962. By this date, outdoor sculpture meetings of this sort had spread from Austria, Switzerland, Germany and Belgium to quite a few other countries. The conditions were always the same, though some provided better living and working conditions. Now the meetings are worldwide."

"Such undertakings then began with extremely devoted individuals willing to tackle government authorities, grants, etc. For Mitzpeh Ramon, it was Ezra Orion who lived in Sde Boker and was mad about the desert. He contacted me at the Visual Arts Center and we worked together on arrangements in the beginning. But in 1962, I was invited to a similar event in Yugoslavia to work in a stone quarry or on large wood sculptures near an old forest of giant oak trees. I chose the latter. The only woman among 10 men, I made a 3 part project called "Procession", which stands in front of an art museum in Kostanjavitza na Krkr and when last seen (in 1985) looked as though it had been carved the day before. (The people there know how to care for wood sculpture, many are folk carvers and even kids whittle bits of wood during the long hard winters.) I met several of the artists who were to participate in the first Mitzpeh Ramon meeting ; some in Yugoslavia, Diske in Paris, and others on board the ship on the way to Israel."

"A second sculptors' meeting was discussed frequently but it was not until 1986 that our efforts bore fruit; perhaps by then there was more money spent on art, perhaps Ezra had acquired better skills of persuasion. We toured the site in March of 1986 and each of us chose the spot for his/her sculpture. In May we chose our stones and in August returned to find them at the chosen site of each sculpture. Ezra's job was to keep the few tractors and other machinery available in some order to each artist while working on his own project, a very large one.
In 1988 several more sculptures were added and an opportunity given to those who wanted to make any additions or changes to what they had done in 1986. I added two large standing "sentries" at the wider end of the trough."
(From the artist by eMail dated April 11, 2010)

for more information about the artist go to: havamehutan.com