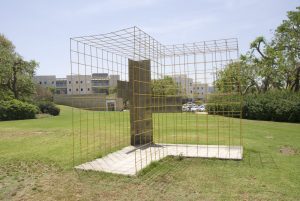 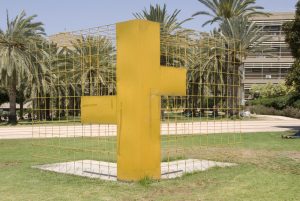 Click on image to enlarge
Description A steel grid and corner assembly that either encloses space or frames the view
Caption A minimalist sculpture that screens the world or frames it. With mirrors inside and metal plates on the outside, it invites viewers to compare the view, nearly identical except that much is reversed:
the direction and thus the view of the campus,
the reflection versus the plate,
inside not outside,
enclosed rather than blocked.
All of this accomplished with a simple set of lines and plates that resemble a hockey goal, and reveal the artists attraction to grids that organize the landscape.
"I like to experiment with unusual art media as new projects emerge. I like to create and play with the forms and painting to escape from the flat surface of the canvas.
My simple philosophy:
1. Creation is making something out of nothing - like an idea.
2. Art is making an idea real for others to sense it in a beautiful way.
3. Beauty is that which pleases the senses or spirit.
4. The highest commodity of an artist is the amount of attention his work gets.
From the artist's web sie: www.benzviart.com/

Other References For more information about the artist search "  Ronnie Ben Zvi artist Ein Hod  " and that should bring up her page. (The link does not work)