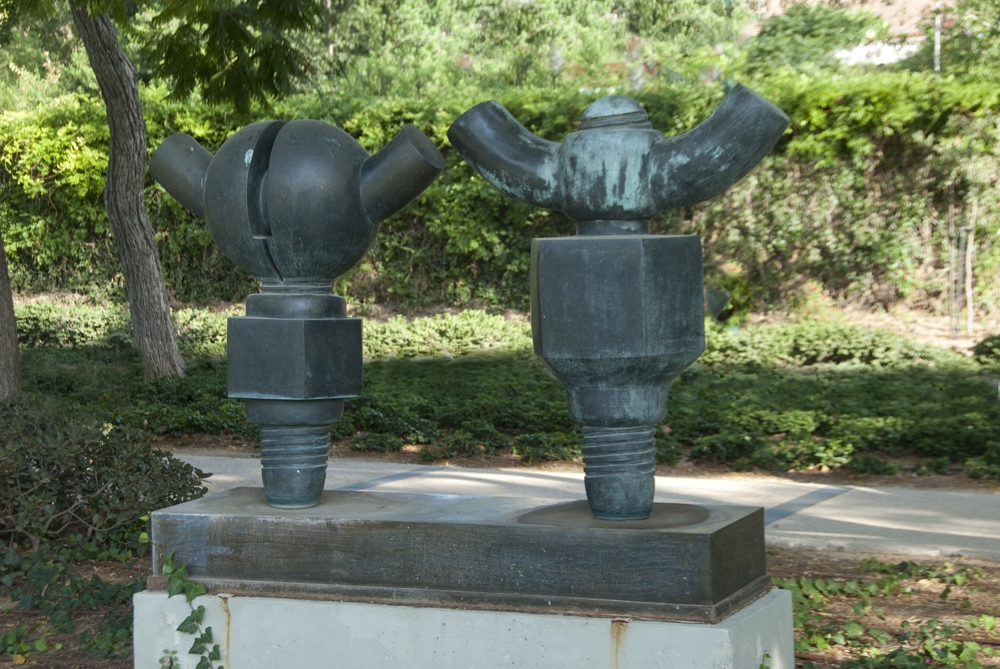 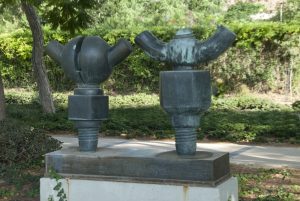 Click on image to enlarge
Description A large scale celebration of common fittings
Caption "Sorel Etrog (born 1933)Born in Lasi, Romania in August 29, 1933, Sorel Etrog has created a reputation as an intense, dynamic sculptor. After a turbulent and traumatic childhood, Etrog began his formal art training in Tel Aviv after his family immigrated to Israel. In 1959 he immigrated to New York attracting great attention within the North American artistic community, quickly establishing himself as one of North America's pre-eminent sculptors. That same year a chance meeting with Toronto collector Samuel J. Zacks resulted in a solo show in Toronto. Now dividing his time between Toronto and New York, he finally established his home base in Toronto in 1963 and became a Canadian citizen 3 years later.
With a career spanning 50 years and highlighted by collaboration with artists such as Eugene Ionesco, Samuel Beckett, John Cage and Marshall McLuhan, Etrog developed a complex visual vocabulary to create an art that explores the tension of our time. He describes his art as "tension created by pulling together and pulling apart, with being stuck and being freed, a world of grabbing and holding on and losing hold…. bringing shapes together but at the same time giving each an independence."
The many stages of Etrog's career include such media as painted wood, screws and bolts, hinges, steel constructions, composites and bronze sculptures. He has been described as "…this poet of the physical is not only a sculptor, but also a writer, designer, film maker, illustrator, raconteur, painter, philosopher, and existential comedian."
In addition to designing Canada's top film award in 1968, "the Genie" statuette (which was known as "the Etrog" until 1980), Etrog's work presides in an astounding number of permanent collections, including the Tate Museum in London, the Museum of Modern Art and the Solomon Guggenheim in New York, the Kunstmuseum in Basel, Musee National d'Art Moderne in Paris, and the National Gallery of Canada in Ottawa. Etrog is also a member of the Order of Canada since 1995..
"From: www.lesliesacks.com/gallery/artistPages/exhib...

Other References About the artist: http://viewoncanadianart.com/2008/08/01/underrated-cana...