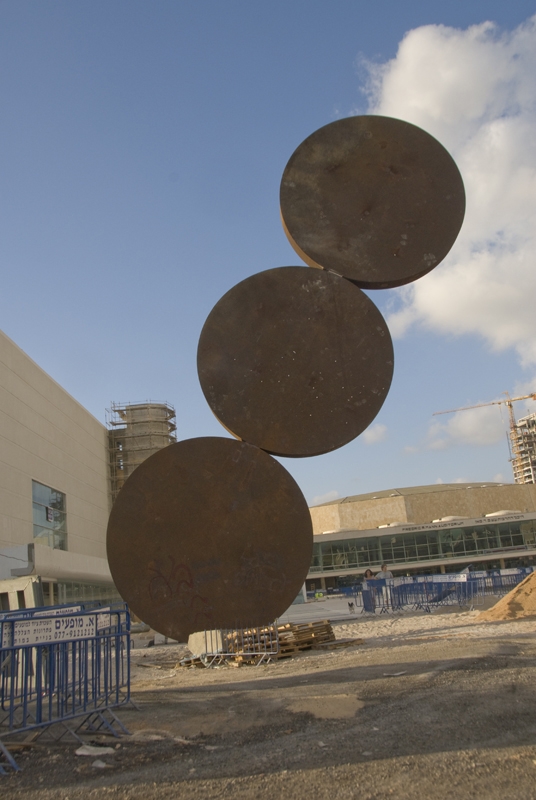 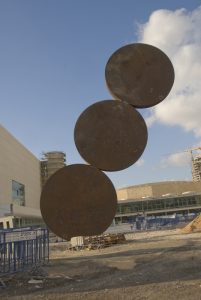 Click on image to enlarge
Description Three rising circles that defy gravity - and seem hooked to a cloud
Caption About the artist:  "KADISHMAN, MENASHE (1932– ), Israeli painter and sculptor. Kadishman was born in Tel Aviv, the son of Russian pioneers. When he was 15 his father died and he had to give up his education, leave school, and help his mother. During his army service Kadishman served as a shepherd at kibbutz Ma'yan Barukh. This experience made an indelible impression on him that was later expressed in his art. In 1959 Kadishman followedItzhak *Danziger 's advice and went to London to study sculpture in the St. Martin School of Art. During the 13 years that he spent in London he refined his Minimalist Conceptual style. Most of his sculptures from that period were made from steel or aluminum and some of them included glass, too. The common theme in these sculptures was tension. The forms assembled in the sculptures created a strange posture that was contrary to the laws of nature. The ability of the sculptures to stand without falling constituted their formal power. Kadishman installed some of these sculptures in Israel on his return to his homeland (Rising, 1974, Habimah Square, Tel Aviv)."
From Jewish Virtual Library: www.jewishvirtuallibrary.org/jsource/judaica/...

Other References About the artist: http://www.kadishman.com/

For more information about the sculpture: https://news.artnet.com/art-world/tel-aviv-pink-bikini-...

Head Within A Head