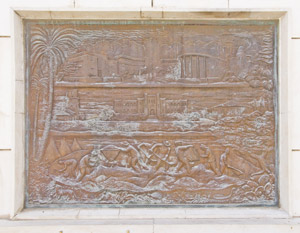 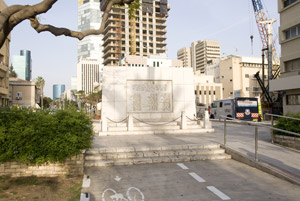 Click on image to enlarge
Description Monument with a bronze relief depicting the founding and develppment of Tel Aviv
Caption The Founders Monument is on Rothchild  in front of the Bet HaZzma'ut:

In Tel Aviv there is a memorial at 16 Sderot Rothschild, which also from a religious point of view is the most important place in the history of modern Israel. It was there that the State of Israel was founded on 14th May 1948 and many Bible verses inscribed in this place show that the Jews experienced the living God. There is also a large picture showing immigrants (Olim) standing in front of tents, their first dwellings, together with the Bible verse: "Behold, I will bring them from the north country and gather them from the outermost parts of the earth.' (Jeremiah 31:8)

"The name Tel Aviv (literally "Spring Mound") was chosen in 1910 from among many suggestions, including "Herzliya". Tel Aviv is the Hebrew title of Theodor Herzl's book Altneuland ("Old New Land"), translated from German by Nahum Sokolow. Sokolow took the name from Ezekiel 3:15: "Then I came to them of the captivity at Tel Aviv, that lived by the river Chebar, and to where they lived; and I sat there overwhelmed among them seven days."[20] This name was found fitting as it embraced the idea of the renaissance of the ancient Jewish homeland. Aviv is Hebrew for "spring", symbolizing renewal, and tel is an archaeological site that reveals layers of civilization built one over the other."
From: en.wikipedia.org/wiki/Tel_Aviv