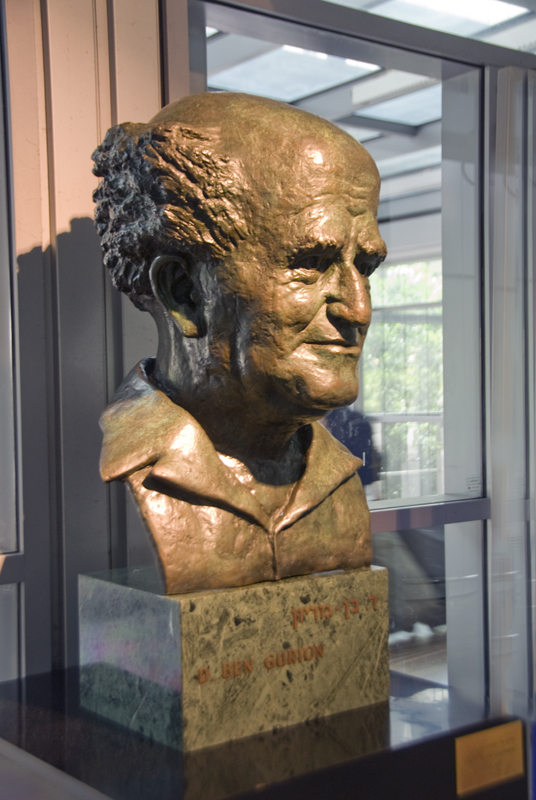 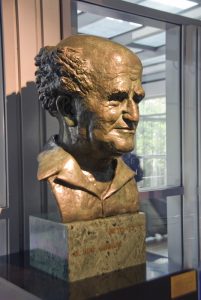 Click on image to enlarge
Description A sculpture that greets visitors as they pass through the airport
Caption "If you've ever been to Israel, one of the first things you saw when you landed was a larger-than-life bronze bust of David Ben-Gurion sculpted by my Aunt. Dorothy Wolf. It greeted me when I visited at 17. My son and his friends saw it when they debarked during an 8th grade trip. My Irish researcher, who married a Holocaust survivor's daughter, saw it there, at Lod Airport.Today, two days short of the 60th anniversary of the Jewish state, I met my family at the Israeli consulate to dedicate the original cast, a gift from my aunt's family. I submitted my passport number in advance, took a taxi to Wacker Drive, checked in with my driver's license at the security desk, rode the restricted elevator and pressed the buzzer beside the locked steel doors.They gave me a pass on the metal detector, and I joined the crowd.Aunt Dorothy was there, and thrilled to see me. In truth, every time she saw me she was ecstatic, and gave me a warm embrace: when I walked into the room, 2 minutes later, and 2 minutes after that. Each time was the first timeor so it seemed through her Alzheimer's fog.Still, she celebrated. The Israeli Consul-General spoke a moving speech. My father fumbled with his new digital camera as the consulate unveiled a plaque commemorating the occasion. Dorothy blinked, perhaps uncertain about the fuss. It hurt my heart to think about waiting so long for recognition, to the point where it is unrecognizable."
By Gail, from her Blogdated Tuesday, May 6, 2008 at wishitwerefiction.blogspot.com/2008/05/lettin...

Death Notice: "Dorothy D. Wolf,nee Datlow, 87, was a talented artist and sculptor. At the age of 86 Dorothy was honored by the State of Israel for the stunning portrait she had done of David Ben Gurion.
"From: articles.chicagotribune.com/2008-11-20/news/0...