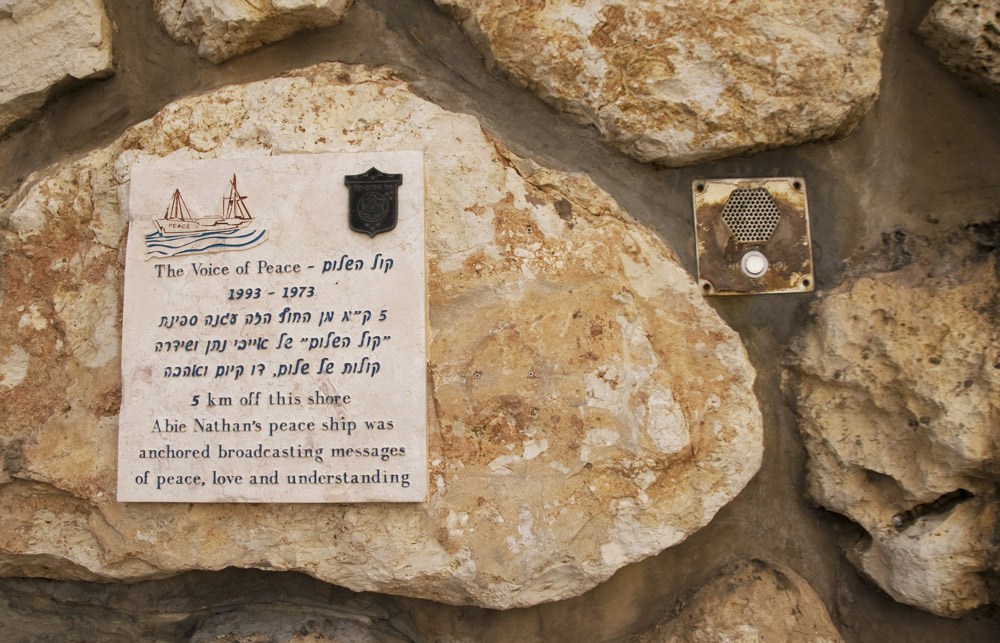 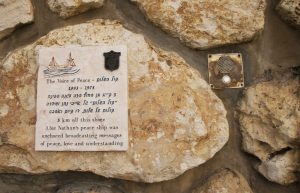 Click on image to enlarge
Description A plaque and speaker that plays segments of Abi Nathan's broadcasts from the private, or is that pirate, floating radio station
Caption The ship M/V Peace was anchored 3 miles off the coast of Tel-Aviv broadcasting on frequency1540 kHz AM 100 Mhz FM for 21 years

In May of 1973, Israels most famous offshore radio station took to the air. Like others before, it changed the face of (Israeli) broadcasting. A survey carried out by state radio station places the "Voice of Peace" as the most popular station, taking 40% of the listeners. A lot happened to the VOP in their 20 year history, but there is no doubt that it left its mark on Israeli and world broadcasting. Many famous DJ's broadcast with the VOP over the years - Tony Allan, Crispian St John (Howard Rose), and Kenny Page to mention just three.

Some say that the final days of the VOP occured when Abie Nathan decided that because the Israeli government and the PLO were talking to each other, there was no need for the VOP anymore. The REAL reasons were that debts were mounting, competition from Israeli legal stations and the soon to be introduced local commercial stations in Israel, all played a factor in the closure of the VOP.

1993:   The end went like this ...............  1st October at 09:00 the last program was aired from the Voice of Peace, giving some of the history of the station. The mayor of Tel Aviv, Shlomo Lahat went out to the ship and took part in the broadcast at 13:00, he stated he would promise an anchorage for the M/V Peace in Tel Aviv harbour and the ship would be rebuilt as a peace museum. The station closed with Pete Seeger's "We shall Overcome" instead of the usual station theme.

14:57 The transmitters were switched off and the Voice of Peace closed down. For the next few days the M/V Peace remained anchored off the coast of Tel Aviv, waiting to be taken into port and converted into a museum.
The Government kept changing plans for the ship. While still offshore the transmitters were run and several test broadcasts were made.

Abie Nathan grew impatient and ordered the studios and transmitters to be disassembled. Afterwards the M/V Peace sailed to Ashdod where the studio equipment, generators and transmitter parts were removed from the ship.

28th November. The M/V Peace set sail on her final voyage, fifteen miles off the Israeli coast, reaching the destination at about 12:00. The hull plugs were removed from the engine room and lower hold and the pumps switched on, to pump water into the ship.

19:33 the ship sank, the last pictures being taken by a Reuters agency photographer.

Other References For a history of Abi Nathan's Voice of Peace: http://www.icce.rug.nl/~soundscapes/DATABASES/VOP/vop_a...

You may be interested in the 2009 film "The Boat That Rocked" directed by Richard Curtis by with Philip Seymour Hoffman and Kenneth Branagh, go to: https://www.timeout.com/london/film/the-boat-that-rocke...