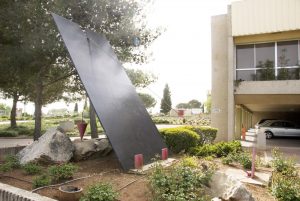 Click on image to enlarge
Description A precarious arrangement of forces
Caption "Yigal Tumarkin was born in Dresden, Germany, in 1933. He‘s a multi talented Israeli painter ,sculptor, sketcher, graphics and stage designer. Martin Hellberg, his father, was a German theater director and actor. He immigrated to Israel at the age of two with his mother. He studied sculpture in Ein Hod, a village of artists in the north of Israel, after his military service. Yigal Tumarkin traveled to Japan and America in 1962 to study Japanese painting techniques.

In 1961 he returned to Israel and created his Dessert sculptures in Arad and Dimona. At this time Yigal began sculpting with different parts of weapons (like his famous " He Walked the Fields"- 1967) . Tumarkin built several memorial monuments such as the Peace Monument in Lod, constructed from tank parts and the famous Holocaust Memorial in Rabin Square, in Tel Aviv. In 2004 he was awarded the Israel Prize. "
From: [http://tmartgroup.com/yigal-tumarkin-bio/]/
For more information about the artist: [https://en.wikipedia.org/wiki/Igael_Tumarkin]

Other References To see another Tumarkin sculpture, Happening, go to: http://www.israelpublicart.com/public_art/?art=happenin...
And to see Mitzpe Moav go to: http://www.israelpublicart.com/public_art/?art=mitzpe_m...
To read about Igael Tumarkin: http://en.wikipedia.org/wiki/Yigal_Tumarkin
And for a biography: http://tmartgroup.com/yigal-tumarkin-bio/