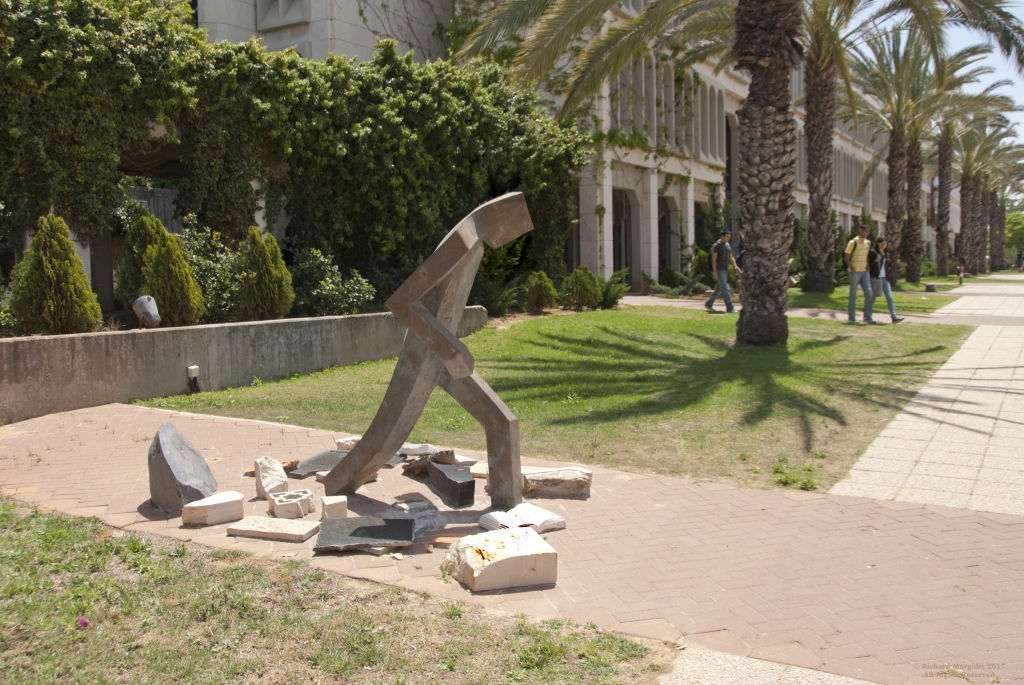 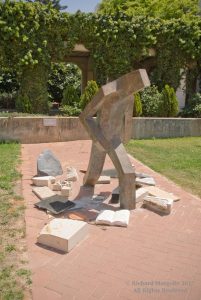 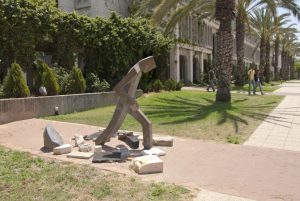 Click on image to enlarge
Description A very serious representation of the loss of books, fragile ontainers of memory and culture
Caption "For their courage, strength and resolve in picking up the pieces of their lives after the horrors that were forced upon them by the Nazis. They pushed forward and carried on. They had to make up for all that was irreplaceable - years of their lives, the loss of their homes and their possessions, and their faith in the decency of people. Some of the survivors share their experiences during the Holocaust, some do not. But they all look back and they all remember."
From the artist's web site: vyoran.com/artcult11.htm

About the artist: "The first twenty years of her life were spent in China. She was born there to Jewish parents who had emigrated from Russia. She was educated in English at the Jewish School in Tientsin during the Japanese occupation of China and throughout World War II. Her entire life has been an exposure to a conglomerate of cultures - Chinese, Russian, English, Jewish, Japanese. Her art is influenced by these cultures.
From the artist's web site: www.vardayoran.com

More about the artist:
"Varda Yoran is a sculptor located in Brooklyn. She was born in China to Jewish parents from Russia, lived through the Japanese occupation of China, World War II, the takeover of the communist regime in China, and the independence of the State of Israel. She went to Israel, where she lived for 30 years. Then spent 2 years in London, before relocating to the United States. Her work reflects the many cultures she had been exposed to throughout her life. Her sculptures range in size from very small to 15’ high, in a variety of materials - stone, clay, bronze, wax, lucite, aluminum. She has participated in many group shows and solo exhibits, in the United States, Israel, Canada, Italy, Finland. She has 5 large outdoor sculptures in Israel, on the campus of Tel-Aviv University, Rabin Medical Center, the Israeli Airforce Center, and the Ghetto Fighters Museum. Varda’s sculptures transcend language and culture."
From: vyoran.com

The label says the sculpture was donated to the University by Ruta and Felix Zandman.

Varda Yorham helped her husband, Shalom, publish the book “The Defiant” about surviving the holocaust.  “It follows the life of a 14-year-old Jewish boy in Poland for the next seven years through history. Written straight after the war, it is considered, like Anne Frank’s Diary, a historical document and is referred to by historians and researchers.”

“I translated his memoirs that he wrote in 1946 straight after the war, and published in 1999 because for 45 years he didn’t know where the manuscript was. In 1990 we found it in a battered little suitcase, brought it to the States, translated it from Polish into English, shaped it into a book and it was published by St. Martin’s Press. It later was translated into Hebrew, Chinese and Russian.”
(From an eMail dated 3/5/17 )
There are paperback, hardbound 1st editions and a few signed books available at Abe Books as of March 2017: [https://www.abebooks.com/book-search/isbn/0312145853/]