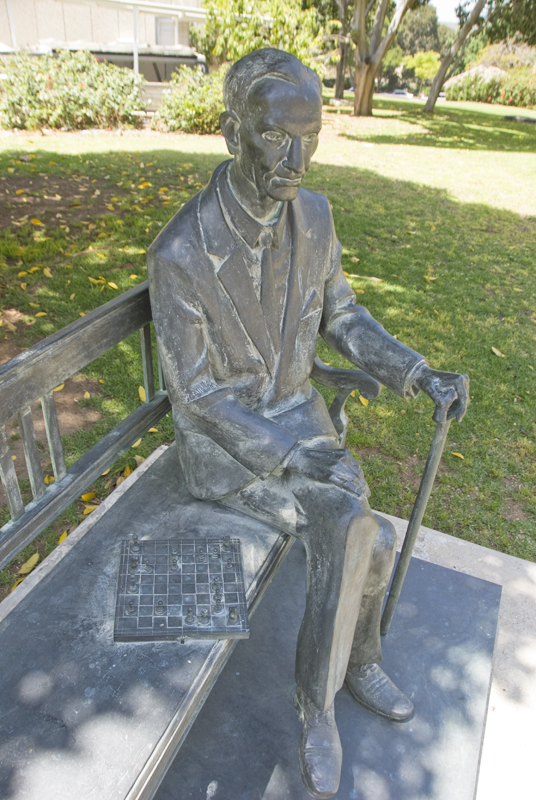 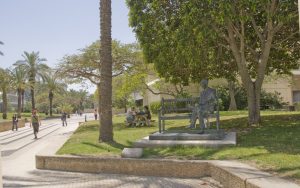 Click on image to enlarge
Description A man on a park bench with a chess board and a book, overlooking a promenade
Caption "The monument of Jan Karski portrays an elderly gentleman sitting on a bench over a chessboard. Everything about it, including the situation, is painfully realistic. Karski, a legendary courier of the Home Army who revealed the truth about the Holocaust in London and Washington, was a professor at the School of Foreign Service at the Georgetown University. On his monument, which is unusually low, without a plinth, he has his own features and silhouette. Also the fact that he liked playing chess and was a good player is depicted. Even the arrangement of the pieces on the chessboard is not accidental. The Cracovian sculptor chose it after having learned the basic rules of playing chess and after having consulted some champions on the particulars. The empty bench seems to be inviting you to sit down and play. However, the arrangement is such that no matter who joins in the game and what moves he or she devises, Karski is going to win. Such a monument may be perceived as a negation of everything that is accepted and approved by the American university and intelligentsia circles, by the artists and by the capital city. And yet... A lot has been said about the timeless calmness emanating from that figure and the unfinished game of chess seems to be saying: "Stop for awhile and think...".From: www.badyna.pl/index_a_english.htmlThe sculpture is in front of the Abraham and Eith Spiegel Family Building, near Alert Einstein Square."Jan Karski, whose real name was Kozielewski, was born in 1914 into a Catholic family in Lodz, Polamd. After graduating in law, he began work in diplomacy. During the Second World War, as an emissary of the Home Army to the Polish Government in Exile, he gave the Allies a detailed account of the extermination of Jews in Poland. In the US, he met with President F.D. Roosevelt among others, who did not, however, believe his reports on the Holocaust.During a later courier mission, Karski was arrested and tortured by the Gestapo. So as not to breakdown ? he tried to commit suicide by cutting his veins. Taken to hospital, he managed to escape with the aid of Poles working there.To corroborate his reports on the Holocaust, Karski twice entered the Warsaw ghetto in disguise with the aid of "Zegota" (the Council of Aid for Jews) and Irena Sendlerowa, who saved 2,500 Jewish children by transporting them out of the ghetto.In 1994, the 80th anniversary of Karski's birthday, he was given honorary citizenship of Israel. He also received the "Righteous Among the Nations" title from the Yad Vashem Institute.Jan Karski died in July 2000 in Washington."From: www.eduskrypt.pl/a_statue_of_jan_karski_erect...