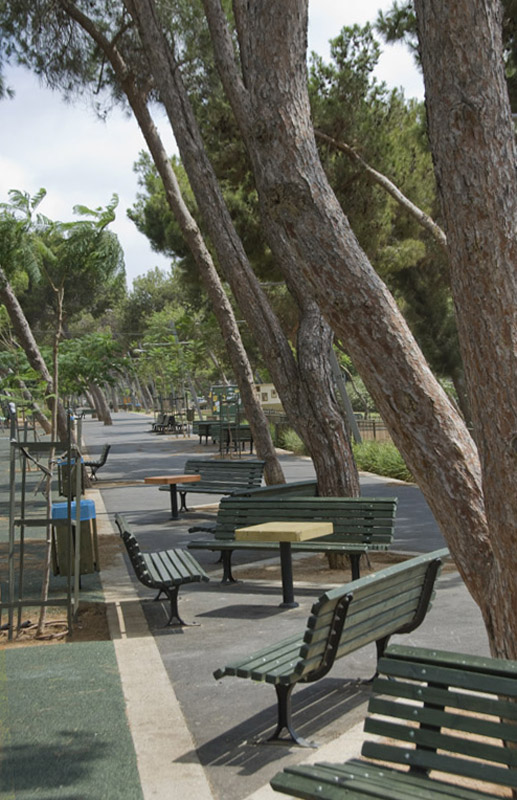 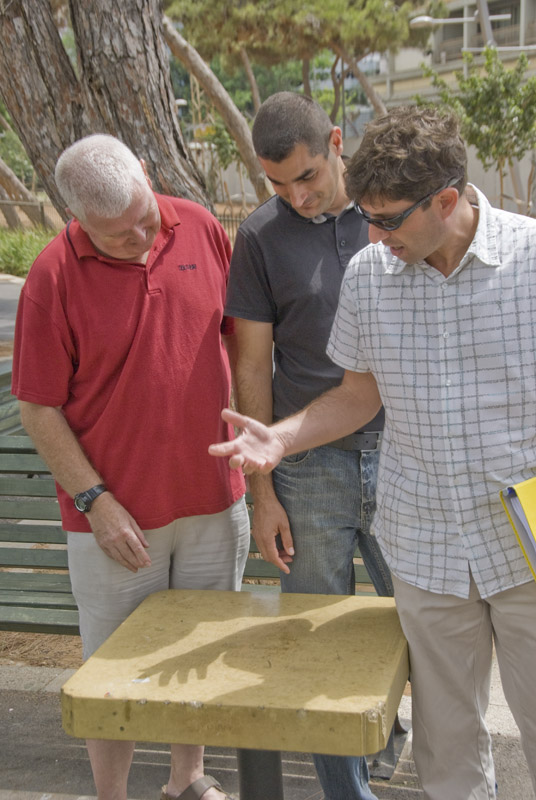 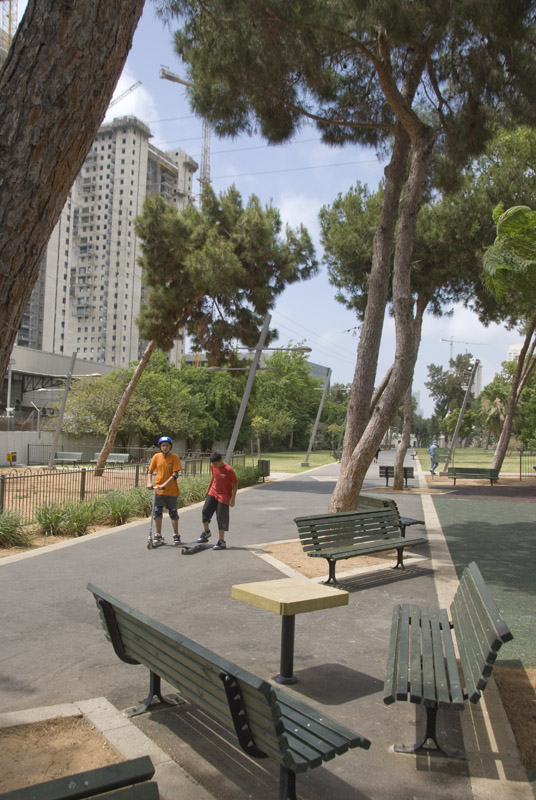 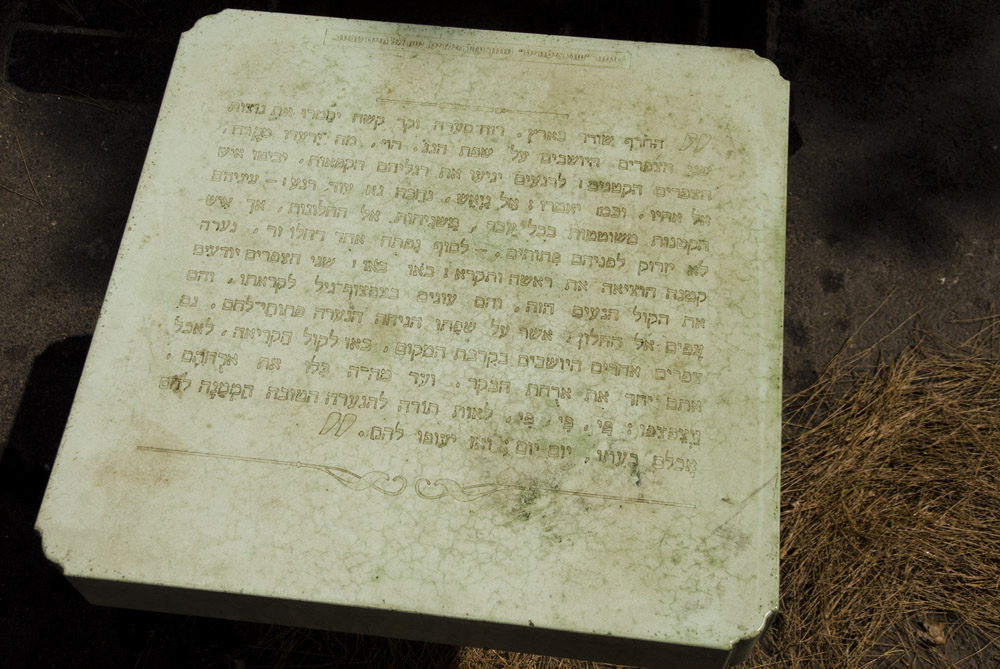 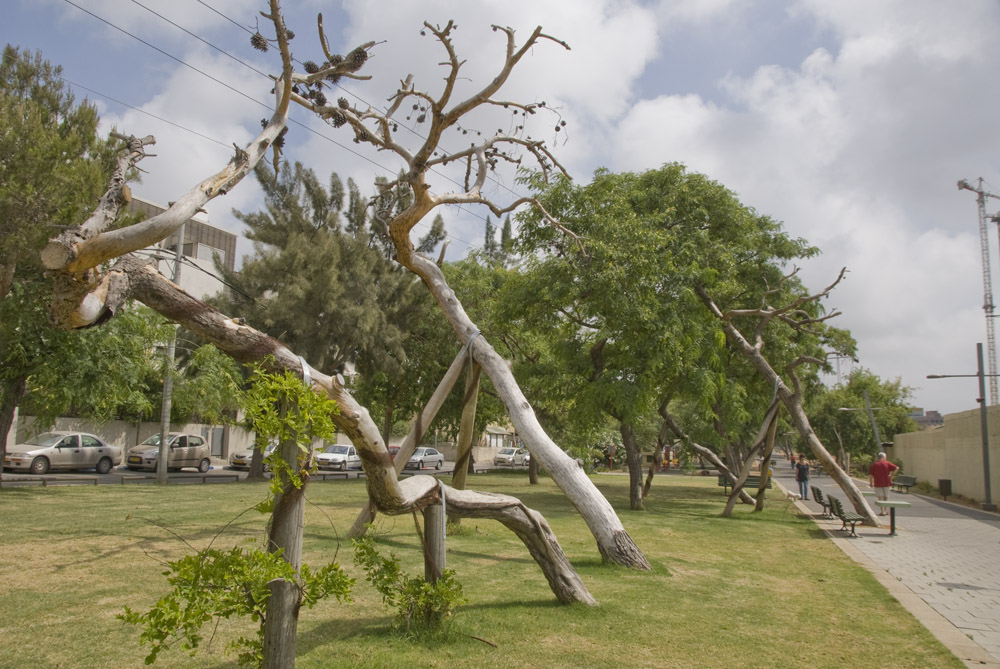 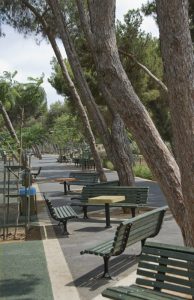 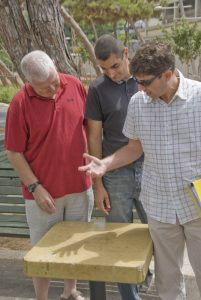 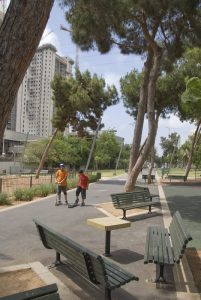 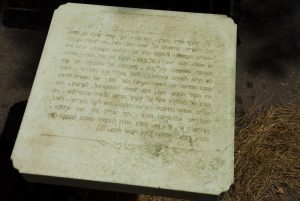 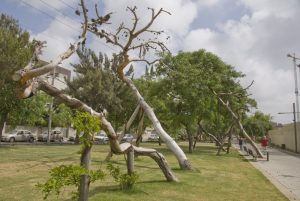 Click on image to enlarge
Description A linear park that features tables with poetry and text engraved in the surface, childrens areas that encourage creativity, benches for lingering and contemplation, and, you should appreciate, even the trees are creative.
Caption "The park is named "Hahascala Park" after the Jewish Enlightenment, a literary movement in the late 18th and early 19th century. We tried not to make it too didactic, so the solution was to collect texts and poems by the authors of which the streets in Bizzaron neighborhood are named after (all the streets perpendicular to the park eastwards)."
By eMail from Ram Eisenberg who designed the park. He added: "I had the benefit of working with some wonderful professional consultants including Haim Cohen who researched Hahascala, Ofer Kotler the graphic designer that worked on the plates, Nurit Segev who did the planting and Rami Alovitz that worked out the lighting."

The names of the streets along Hahaskala going from north to south are Ben Zeev, Ginsburg, Erter, Gotlober, Shulman, Zweifel. Slonimski, Shlomo Rubin, Mandelkern, Ben Yaakov, and Tabayov, all authors associated with Jewish Enlightenment movement. "Haskalah:(enlightenment,education, from sekhel, intellect, mind), the Jewish Enlightenment, was a movement among European Jews in the 18th-19th centuries that advocated adopting enlightenment values, pressing for better integration into European society, and increasing education in secular studies, Hebrew language, and Jewish history.

Haskalah in this sense marked the beginning of the wider engagement of European Jews with the secular world, ultimately resulting in the first Jewish political movements and the struggle for Jewish emancipation."
From: en.wikipedia.org/wiki/Haskalah

It should be noted that according to the internet, my source for ultimate wisdom, Jewish Enlightenment can be written either Haskalah, or Hahaskala.

Personal Side Note:
As a photographer who for the past couple of years has been exploring Jewish cultureal subjects — Family Gatherings, mostly Seder tables; catalog photographs of my Rochester temple's Menorah collection; Public Art in Israel that is heavily oriented toward Zionism and spirituality, I also discovered that a very significant number of photographers are Jewish, far beyond random distribution. I am curious about the relationship between the Jewish Elightement and the introduction and development of photographic practice that occurred simultaneously, that - it seems to me - either benefitted from or was influenced by the other. That's a topics I'm going to explore. The very complete index for Shmuel Feiner's book "The Jewish Enlightenment" does not include any reference to photography and I'm not aware of any research into that topic. I've been wondering to what extent I am a photographer because I am Jewish.

Other References For further reading look at "The Jewish Enlightenment", by Shmuel Feiner, published in 2002 by the University of Pennsylvania Press: http://www.upenn.edu/pennpress/book/13962.html