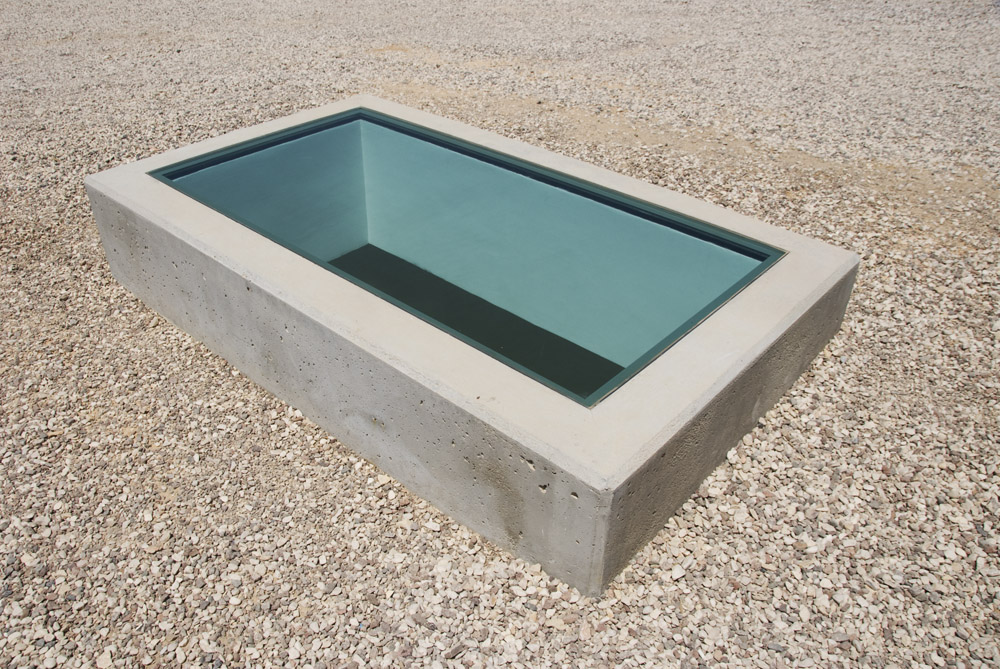 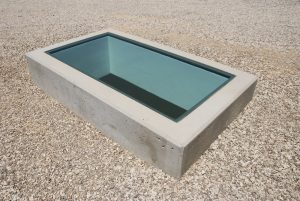 Click on image to enlarge
Description A "sculpture" because the museum says it is
Caption "Equinox, an installation is a subterranean void some five meters deep. The only component of the work that is visible above ground is a bench-like structure with a transparent top through which the viewer can observe his own shadow projected into the void below, mixed with the reflections of the sky in the installation's glazed opening."
From: www.imj.org.il/magazine/Home.html

Ullman created the underground "Bibliotek" memorial on Bebelplatz Square in Berlin, where the Nazi book burnings began in 1933. The memorial consists of a window on the surface of the plaza, under which vacant bookshelves are lit and visible. A bronze plaque bears a quote by Heinrich Heine: "Where books are burned in the end people will burn." Ullman explains: "It begins with the void that exists in every pit and will not disappear. You could say that emptiness is a state, a situation formed by the sides of the pit: The deeper it is, the more sky there will be and the greater the void. In the library containing the missing books, that void is more palpable. We expect (the books) but they are not there.

In 1997, Ullman completed a synagogue memorial in collaboration with Zvi Hecker and Eyal Weizmann, commemorating the former synagogue in Kreuzberg. Another of his projects is "Hochwasser" (Flooding) on a small island near the Werra River in Germany. It was inspired by a boat Ullman saw there with a sign on it stating it had a capacity of up to seven passengers. Ullman's father, Yitzhak, who had lived nearby, immigrated to Palestine with his seven siblings in 1933.

Ullman has created subterranean sculptures, some of which barely protrude from the ground, such as Yesod in Tel Aviv. They touch on universal themes such as the meaning of place and home, absence and emptiness. They have been described as simultaneously "celestial and earthbound, metaphysical but sensual and tactile.
Edited from Wikipedia en.wikipedia.org/wiki/Micha_Ullman